KNOXVILLE, Tenn. (WATE) – A Knoxville woman is turning grief into something positive.

Now, Ashley Lynch is filling the void by helping hundreds of other seniors smile during these challenging times.

Nominate a hero you know

We were able to surprise her with our Hero award and flowers, something tough to do since Ashley is Director of Security at the Pinnacle at Turkey Creek, always keeping a close eye on what’s going on.

Born of love and loss

While she’s admired by her friends and coworkers for her success on the job, we’re honoring her because of her heart for seniors, born out of the love and loss of her own grandparents. Her grandfather, Air Force veteran Doyle Arwood, was 89 when he died in February 2019. Her grandmother Irene was to follow only six months later.

“The thought of them, ” Ashley says, “how much I loved them, gave me the drive to be able to do something for everybody else’s grandparents.”

So, Ashley installed a mailbox in front of Fleming’s restaurant in Turkey Creek, with a sign asking for letters of love and encouragement for local seniors.It stays packed full of messages.

300 cards from 16 states … and still collecting

“500 cards, 16 different states because some more arrived over the week to 10 different nursing homes, and we’re still collecting!” Ashley laughs.

“Not being able to see your family, talk to them, spend time with them, any little bit helps,” she says.
It’s more than a little bit.

In November, Ashley’s “Be a Santa to a Senior” program kicks off, providing truckloads of brightly wrapped gifts to seniors in need.

Those who know her say  Ashley is the definition of a hero.

“If there’s anyone thing I would use to describe Ashley, never mind the fact of her power and her energy,” says Colin Cumesty who nominated Ashley for our hero feature.

And Darryl Whitehead, General Manager of Pinnacle at Turkey Creek says, “she’s from here. She’s a graduate of Farragut, lived in the area her whole life and those are the people that are the nucleus of what East Tennessee’s all about.”

Thank you, Ashley Lynch for all you do for others.Your grandparents would be so proud.

“They’re my world and I miss them greatly.”

Our community always likes to help us celebrate heroes.We send a special thank you to Lisa Foster Floral Design for creating the beautiful arrangement with flowers representing the birthday months of Ashley’s grandparents (Crown Astor and Chrysanthemum).

How to join in the letter campaign

If you’d like to take part in the letter campaign, drop your cards and letters off at the mailbox by Fleming’s restaurant, or mail them to:

We will update you on the “Be a Santa for a Senior ” program when it kicks off in November.

More WATE 6 On Your Side Heroes Stories

KNOXVILLE, Tenn. (WATE) -- Becoming a Gold Star family, a family that loses a loved one to the service of their country, is an honor no one ever wants to receive.

Gold Star family members have been recognized since 1936 on the last Sunday of September. A local woman who is honoring these families this year has her own heart-wrenching story to share.

Tennessee’s Teacher of the Year, Kami Lunsford, on how to keep the magic going in class amid a pandemic

KNOXVILLE, Tenn. (WATE) -- She was just named Teacher of the Year for the state of Tennessee, right in the middle of the most challenging time in education.

Not only that, she teaches music. It’s tough enough to talk with a mask on, much less sing. We went behind the scenes to see how Kami Lunsford at Karns Middle School makes it happen.

KNOXVILLE, Tenn. (WATE) -- Giving hope to the homeless by something as simple as a haircut. That's just part of the mission of Carecuts, founded by longtime hairstylist Marti Baker.

Baker doesn't just cut hair and hand out food. She takes time to talk to the people she's helping, finding out their stories, literally saving lives. Now it's our turn to find out Marti's story.

Friday Frenzy Week 6 final scores from across the state

Knox County small business leaders back Board of Health 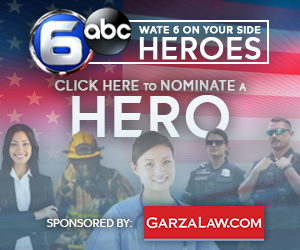 Fall foliage in East Tennessee: When it peaks and what causes the leaves to change color